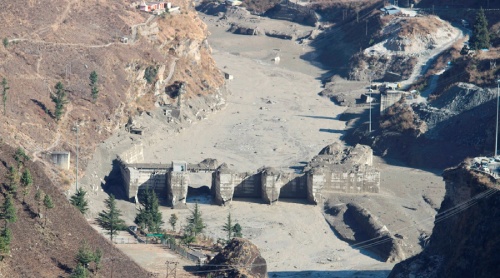 The Himalayas are saying – ‘Do not disturb my slumber. I myself do not know the scale and extent of the havoc I will unleash.’ – Sriparna Saha

(Image: The Tapovan – Vishnugad hydel project completely washed away by the Dhauli ganga river. This article is on the Chamoli – Joshimath – Uttarakhand Glacier Burst and the havoc it wreaked through the Rishi ganga, Dhauli ganga and the Alakhnanda rivers. Sriparna Saha is an architect working on ecologically sustainable homestay,home renovation projects and mountain getaway houses in the Uttarakhand Himalayas.)

Is anyone really listening?

At the Meeting point of Dhauli ganga and Rishi ganga

I stand at the edge of the mountain just below the meeting point of two gurgling mountain maidens engaged in a constant chatter with each other.

One is the emerald hued elder sister Dhauli ganga, while the other Rishi ganga, the  younger (and thinner) sibling, is a continuous stream of turbulent muddy water. Looking at the later, it is difficult to believe that it too was of a similar colour till the morning of 7th February when a glacier broke off beyond Raini village, thereby leading to a deluge of  ‘cold lava’ (snow, water, silt and boulders) into the Rishi ganga, thereby altering her appearance.

Onlookers enlighten me that it will take quite a long time for Rishi ganga to regain her earlier look.

In front of me, on the opposite hill with the Rishi ganga flowing beneath, is the village of Raini. It has borne the brunt of the mad waters and the evidence of damage and destruction are still fresh and raw.

The mad muddy flow completely devoured the structures of Rishi ganga hydroelectric project, a private hydel project situated near Raini village. Not content with this, the swirling waters then rushed downstream to devour the Tapovan-Vishnugad project and the Rishi ganga hydel project. A mammoth flood of silt and debris entered a tunnel and trapped around 40 workers.

All human endeavours and heroic efforts to trace the missing workers have miserably failed in the face of the fury unleashed by nature. Today almost ten days later, they have yet not been found (dead or alive) and perhaps will not be ever.

The bridge connecting Raini village to Joshimath had also been completely swept away and villagers were using rope trolleys to cross over. They need to risk their lives in the face of their daily unavoidable needs.

Still it seems unlikely that we have learnt our lesson. Do we need to get ourselves in these kinds of situations with so many lives lost where we feel devastated and helpless?

In this state, the tragedy only brings an acute sense of deja vu. As we drive from Joshimath to the site of the tragedy, in the small villages, local residents want to know when too many tragedies will be too many for us to wake up and start acting. The locals tells us that no lessons have been learnt from the 2013 Kedarnath floods. It takes the women to really call out the inconvenient truth. “They call our land Devbhoomi [land of gods], but they have ruined everything that is sacred about the mountains. Between construction and corporatisation and all of it being unregulated, we have destroyed the mountains,” Niti Devi of Parasari village tells me.

While we were returning from Joshimath, work on the ambitious Char Dham highway was in swift progress. Returning back along the Rishikesh – Badrinath route – (Joshimath, Nandaprayag, Karnaprayag, Rudraprayag, Srikot, Srinagar, Deoprayag, Rishikesh) – every bit, it was a tale of devastation writ large on the Himalayan landscape.

We had to meticulously manoeuvre our way through winding mountain roads in a forced expansion mode and had to halt many, many times to allow the monster machines – digging up and drilling into the mountainsides, stripping them of their green shroud and dignity – to make way for us. As I looked on, I suddenly realised that in all the years that I had been coming to the Himalayas, I had never seen them look so bare and beggary. The naked slopes studded with loose rocks and tree carcasses all looked ready to roll at the slightest nudge.

I can already foresee the landslides that will be taking place in the monsoon of 2021 (and several subsequent years) and everytime it rains here.

The warning signals of the impending disasters are all there in the air.

Development needed, but of a different kind

So, there is no stopping the so-called ‘development’. But, the pace and magnitude – of this development – can and needs to be regulated to allow the Himalayan environment and ecosystem to adjust. Road building needs to be done in a more gradual way across several years – a small amount of widening, allowing the landscape to adjust and then another phase involving a small amount of widening, in a gradual and incremental approach.

Power stations and mega road projects need explosives in large quantities, weakening and destabilizing the Himalayan eco-system. If we tried to do all this in a gradual and incremental manner, then these so-called disasters will be far lesser. We, as a society are doing a ‘Himalayan blunder’ in the Himalayas.

Our interventions need to be within the mountain system’s capacity to adjust and accommodate. Entire hills and mountains have disappeared into the river valleys below creating obstructions in the path of the rivers and raising river bed levels. Can’t our developmental interventions be more gradual, incremental and within the capacity of the Himalayan ecosystem? If not, then this is the answer that the Himalayas gives us and without leaving us with any choices.

The 2013 Kedarnath disaster (also, the case of glacial lake bursting its seams) and now, the 2021 Chamoli-Joshimath-Uttarakhand glacier burst disaster-in quick succession-are stark reminders that we are taking things beyond the limits of the Himalayan system’s tolerance. These are notices being served to us by it that the Earth will move on despite the human race if it chooses to ignore the delicate balance of the planet.

How many more disasters will it take to shake our collective conscience and make us swing into action to salvage and safeguard the Himalayas and the rivers flowing through it?

My Travel Blogs : My trips to the Himalayas – My earlier travel blogs ; My Landscape Architecture Blogs : The balancing roles of a Landscape Architect – The Science of Garden Design; Buransh, Buranskhanda and Burans Mahotsav-Rhododendron Arboreum in Uttarakhand Himalayas; My Homestay Architecture Blog : Pahadi Ghar Homestays; My Home Renovation Blog : A Case of Home Renovation and Remodeling

Sriparna Saha is an architect working in projects in the Uttarakhand Himalayan region and has been part of ecologically sustainable homestay and home renovation projects in the Auli-Joshimath area.

Sriparna had visited Raini and Parasari villages as part of the Graphic Era University team to assess and advise on the proposed reconstruction initiative post the Chamoli-Joshimath-Uttarakhand glacier burst disaster. 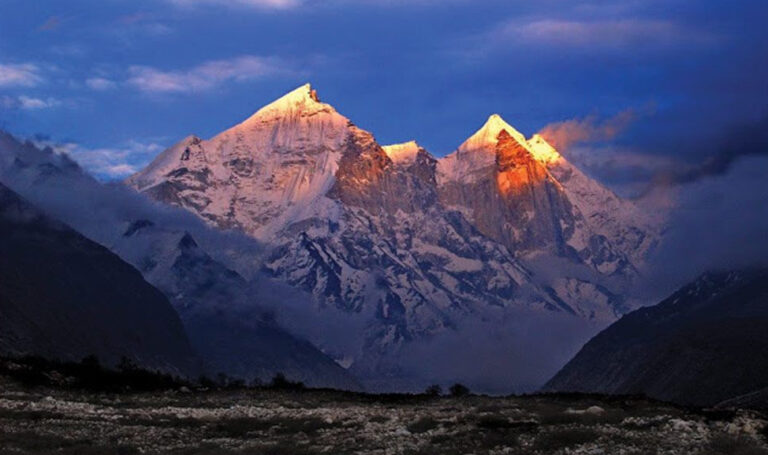 “Himalayas – the very word conjures an ethereal image in my mind- the image of a range of towering mountains steadfastly standing tall against the distant horizon since centuries………..They have been standing like that long before I tread the Earth, and they will continue to stand long after my footsteps have ceased to sound on…

“I have been to the Nainital-Bhimtal-Kathgodam area in several trips to Kumaon, Uttrakhand. But, then this would be a trip with a difference.” I would be accompanying my mother (an architect) who would be checking out several village houses with homestay potential. Finally, in this trip to Uttarakhand, we would be staying in a pahadi…